By Tabrez Khan and Chris Ledger

After an 11 year hiatus, ten KCC men and Sue Wardell landed on the Mediterranean island of Corfu amidst sunshine, smiles and a fresh sea breeze. The drive from the airport put everyone in the holiday spirit and Steve began drinking his beer.

On the first evening, Chris Ledger had figured out a ‘short-cut’ drive to an authentic Greek restaurant that was only known to the locals. Hapless screams at being driven the wrong way down a dual carriage way by an unnamed KCC youth, getting lost in the dark mountainous regions, we finally arrived two hours later at an amazing restaurant where the Greek food and wine were simply better than we’d ever tasted, and Steve continued drinking his beer. The next day Chris produced another gem, this time a charming restaurant in a tiny village that made its monthly sales that afternoon, fed us to the point we could no longer eat or indeed breathe whilst Steve continued drinking his beer. A trip to the beach was the answer so we reached the North-western point of Corfu, a spot that took our breath away. We swam in the warm waters and played ball and Frisbee games in the sea. Needless to say, no trip to a beach is complete without playing cricket so we obliged tradition, using a stick for a bat. Some special moments were Chris playing the best reverse sweep of his career, an uncharacteristic straight drive by Tabby, Steve drinking more bottled beer, San losing his off stump to Ravi and Mark impressing Sue even more by some flamboyant cover drives. Finally, we watched the sunset from the cliff-top restaurant sipping on cool drinks mixed to the sounds of local music. As Steve, continuing to drink his beer, said “I’d build a home here any day.”

On a very hot and humid day the KCC boys (average age 55) reached a picturesque ground adjacent to the Marina at Gouvia to find their opposition full of young Greek nationals. San’s master-stroke message of ‘we’re a mature team’ had led to the opposition fielding a relatively young and inexperienced side. Sighs of relief turned to oh, those must be the overseas players as four gentlemen of Asian origin turned up late. One of these men (Saqib) was very kindly loaned to us by the opposition.

On winning the toss, Tabrez didn’t waste time asking to bat, much to the relief of his team-mates. However, Steve and Ravi preferred the cool shade and were back in the hut before we reached 20. Chris and San took most of the shine off the ball (Chris getting out to a spectacular catch at point). Mark Oppe scored a few but it was Tabby and Furquan who batted aggressively for a 60 run partnership. Sadly, Furquan missed out on a 50 but was KCC’s batsman of the day as we got to a respectable 189.

Supported at the other end by some tight bowling from Khush Khan, Furquan made early inroads into the GEK batting order with excellent outswingers. Sunil continued his relentless chase of most wickets for the season with 3 wickets whilst Saqib took out 4 of the middle-lower order. Ali, who was granted a few lives, scored 45 but no other GEK batsman reached double figures. Surely, no opposition is going to believe San the next time we tour Corfu. We repaired to the bar nearby for beers to savour the sweet smell of a tour success.

KCC’s last match of the season was played in glorious, warm sunshine amidst the historic splendours of Corfu town. After an excellent Saturday night out on the tiles, not only were spirits high but also blood alcohol levels. Skipper Chris Ledger won the toss and chose to bat first. Chris, Steve Thomas and others nursing bad hangovers didn’t trouble the scorers for long, and so by halfway through the allotted 30 overs KCC’s innings was looking distinctly precarious at 89 for 5. Cometh the hour, cometh San Gore. Having opened the innings and watched with raised eyebrow as five wickets fell in quick succession at the other end, San was joined by Mark Oppe at number seven, and together they compiled a superbly judged and executed century partnership to rescue the innings, and get KCC to a competitive total of 193. As the last batting partnership of the season, it was certainly one of the season’s best.

The Atlas innings was strangled at birth as the result of a very tight opening spell from Furquan Kidwai, and after he’d taken 2 wickets and conceded just 10 runs in 5 overs, KCC were very much in the ascendant. If Atlas thought that they might get some respite with a bowling change, they soon discovered otherwise. Cometh first change, cometh Sunil Amar. The old swinger was neck-and-neck to take most wickets in the season with Akhilesh Shailendra, also playing on the same day in the UK. As it turned out, Sunil would need 3 wickets to win the prize. After 5 overs and 5 balls of his allowed 6 over spell, he’d taken 2 wickets for 20 runs, leaving Atlas on the verge of defeat. And so, with Sunil’s very last ball of the season, he needed to get a wicket to win the Bowler of the Year prize. Somehow it was written in the stars, and KCC’s very own Roy of the Rovers propelled the perfect outswinger towards his unwitting victim at the other end. A rank leg-side ball, the batsman thought, and shaped to sweep it down to backward square leg. Already committed to the shot, by the time he saw the late swing back in towards the stumps it was too late. Falling over himself as he tried to readjust, he ended up in an inelegant heap in front of the stumps as the ball thudded straight into his box. The umpire’s finger shot up – BBW, box before wicket, and to the delight of all Sunil had won his richly deserved prize!

By the time our trip ended we had fallen in love with the island. We’d played cricket on two stunning grounds, bathed in Corfu’s sunlight, moonlight and its sea, eaten delicious food, been showered by local hospitality, seen the night-life and made many new friends. We thank our sponsors Puma and Johnnie Walker for their merchandise that our kind hosts greatly appreciated. We look forward eagerly to a return visit. 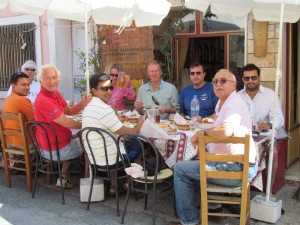 Lunch at a village taverna 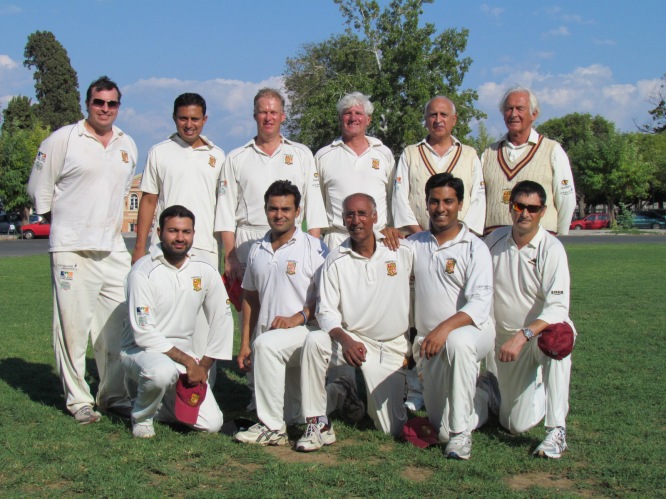