A reminiscence by Michael Blumberg

Vinoo Nath and I met in Kensington not much past dawn and motored south to Clapham where we met Tony Brennan. Tony had not yet begun his distinguished diplomatic career and at the time drove a brand new large limousine provided by the company for whom he then worked. We were off to Bavaria and Austria to play cricket under the banner of Cricket World XI with several KCC members. We were making good progress on the autobahn when around Stuttgart the traffic jammed, Tony slammed on the brakes and we skidded into the back of a mature Volkswagen.

We were soon removed to a nearby Police Station for questioning while photographs of the car damage and the road skid marks were taken. Vinoo and I duly made our statements and signed. Tony was interrogated as the driver for a considerable time. Eventually he emerged with a very tall Policeman who announced to the three of us. “Gentlemen, the situation is like this. If anyone has been injured the fine is 1000 marks. If no one is hurt then the fine is 10 marks.” Now Vinoo had taken a knock on the head and I had bashed my right knee so we were both sitting with handkerchiefs staunching the blood from our respective wounds. We looked at each other and then at the Policeman and in unison declared “No one is injured”. The Policeman replied, “Exactly so”. We paid the lesser fine.

The police declared the car to be unfit to drive but drove us to Stuttgart railway station where we had a two hour wait for the train. And the station bars had closed. The three of us, and our luggage, were thus a glum sight sitting on a bench in the station forecourt. Ugh! And then, pushing a trolley loaded with beer was a couple of youngsters passing right in front of us. “May we buy some beer from you” we asked. To our great glee the German youths replied “Take a crate, we will never drink all this tonight at our party”. We did just that and set about drowning our sorrows for a few hours before joining the train to Munich. We crawled into our hotel at first light.

At breakfast we met the rest of the tour party – Charlie Noakes and family, Sunil Amar, Vivek Rattan, Fred Kensey, Jack Hyams, Scott Ide et al… – and were informed they had a good night out with Munich CC and had discovered Stammstisch which became a KCC tradition for two decades.

Munich Cricket Club was situated at a very pleasant sports complex within the English Gardens apart from the athletics track, which sadly affected Vinoo’s catching in the deep. We drew the first game as veteran Jack Hyams scored an unbeaten 60 very slowly, and lost the second off the last ball with Munich nine wickets down, a match in which Scott hit 48 and I was run out for 60. On Saturday evening Munich CC laid on a magnificent barbecue together with vast volumes of local beer. Tim Yeardley joined the party with two lady friends, and on Sunday evening we took over a long table deep in the English Gardens and sat next to some 25/30 Japanese female tourists. A merry evening was had by all.

Sunil stayed back in Munich while the rest of us drove to Ingolstadt along with some Munich players. Ingolstadt Park CC had been formed in 1836 but had obviously seen better days! We won the match easily and inevitably repaired to a beer garden.

Ingolstadt had received an urgent call from Professor Dr. Brian Fell of Passau. The University had closed down for the long vacation and locked up all the sports equipment including the all important cricket mat. Could they borrow Ingolstadt’s? So the mat was hoisted onto the roof of the Volkswagen Beetle of one of our Munich guests and he and a rather bewildered German girlfriend set forth to Passau.

Passau is on the confluence of three large rivers, one of which is the Danube and this confused Jack Hyams who walked miles over many bridges striving to find our hotel deep in the night. We played Passau CC who comprised ten Germans and Brian. Vinoo had been lobbying all tour for a bowl and so this was his big chance. He flighted some very slow lobs. One of these landed well short of the batsman, bounced several more times, eluded the German batsman’s swish and had just enough momentum to dislodge the bails. A No Ball today but back in 1991 this was a fair ball. Despite the merriment of the occasion we called the batsman back much to Vinoo’s outrage! In fact the batsmen was soon out caught off Vinoo’s bowling.

Sunil Amar who had rejoined the party discovered that he could travel on to Vienna by boat, which he then did. In Vienna we found our hotel and were checking in with a bemused receptionist. “You want the room for one hour or longer?” she asked. Jack then rushed up and enquired what sort of place this was as he handed everyone handfuls of flavoured condoms which he claimed were in bowls at the bar! Hmm! Andrew Simpson-Parker, then a new young Englishman in Vienna had, in all innocence, booked us into a brothel! We inspected the bedrooms which had a magnificent mirror for a ceiling and all over the wall at the foot of the bed – and were these beds big!

Vinoo declared he was not going to share a bed, however big, with Michael Blumberg here and decamped across the road to another hotel. He soon returned, for the hotel opposite was just another brothel and more expensive. We were thus provided with an interesting insight to a side of Viennese life we had not expected to experience. Luckily the ladies in our party who arrived next day seemed to find our location amusing! Jack took the Brothel manageress out in the evening! As for the rest – that stays on tour!

We beat Vienna CC by the devilish ploy of keeping two ethnic Austrians openers in for a very long time! By the time they were out the majority of the overs were gone. Their mighty middle order panicked, played a flurry of rash shots, and finished short of their target. After the match we were presented with decorated shot glasses. Sunil was so impressed by these that next Spring at the KCC post nets dinner, he presented the KCC tourists with KCC decorated shot glasses. An attempt to convert the Cricket World XI tour into a KCC one, Sunil? Perhaps for the sake of your bowling averages! 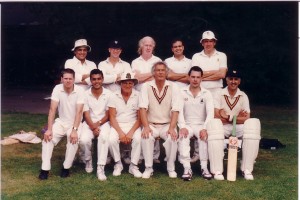