A reminiscence by Ian McLean

After a long, hard season of English cricket it is only natural that come the last day of September the true Kensingtonian turns his back on the autumnal twilight and seeks yet more cricket in more comfortable climes – such as Rome. This trip was hosted by two now long-term friends, Alphonsus (Alfonso) Jayarajah and Massimo (Max) Da Costa, of the Capannelle Cricket Club. Situate on the south-east outskirts of Rome the club is adjacent to the Ippodrome Roma horse-racing track, and presented a matting pitch in a somewhat sandy, stony ground, totally redeemed by the most glorious semi-ruined stone grandstand. The club still thrives today, with evidence of some more grass than we experienced, and has its own web-site, which features amongst other things, the outstanding “Duck Board”, complete with graduated points system depending on how incompetent a duck one manages to secure. And you thought there was only one or two types!

And so it came to pass that a dozen intrepid cricketers*, with support from several wives, arrived in Rome late on 30th September, ready for a relaxing two-header and some “dolce vita”. Without further ado, the next day saw the first game start promptly at 1pm, with skipper Sunil doing what comes naturally (winning the toss) and sending out our season’s star opening pair, Steve and Clive with the brief to not return until tea. Always keen to take instruction, Steve was last of our four wickets to fall for a magnificent 97, with Clive (32) and scribe (32) providing modest support from the non-striker’s end. 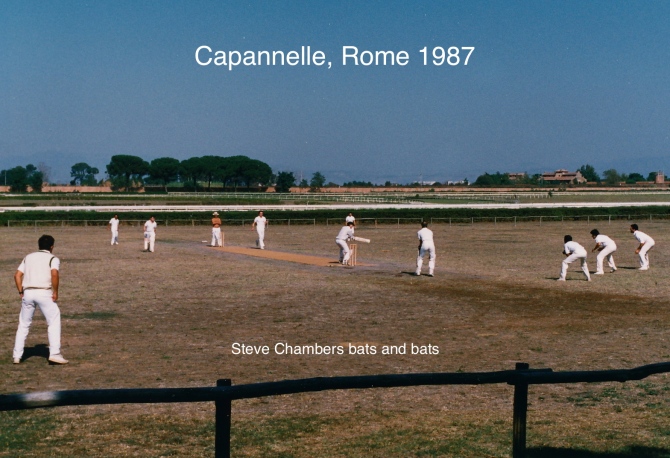 Deciding that 207/4 was enough, we took to the field and let loose our fearsome strike bowler Mike Griffiths (4-23). At 57/5 the more accommodating bowling of Graham and scribe was introduced in time for Capannelle’s secret weapon (Max) to join De Amicis (41) and set the alarm bells ringing. With Max undefeated on 62, and two wickets still in hand at 189/8, it is probably fair to say that the sudden descent into pitch black night at about 6.00pm was a welcome opportunity to settle for a draw. Man-of-the-match: Steve Chambers for his terrific 97.

Amid the usual post-match bonhomie, a sudden rush for cars was accompanied by the news that a wildcat workers strike had thrown the public transport arrangements into disarray. With the skipper and kit thrown into one of the last cars still at the ground, and a promise to see everyone at the hotel, the KCC leadership sped off, leaving a doughty group to spend several hours walking back to the hotel. Sunil was kind enough to greet us at the hotel, and make sure we had all arrived back safely and that he still had enough cricketers for the next game! It may have been two hours, it may have been four, because the necessity to remain hydrated meant patronising a number of small cafés en route (though not much coffee was imbibed), and I really can’t recall much of the latter part of that evening.

Keen to pursue the theme of stress-free relaxation, the following day saw groups of us dispersing around the city. The more cultured tourists took in the shopping, landmark and Vatican sights, but the remaining tour members kept very quiet on the subject of their leisure activities that day.

Dreams of a recuperative lie-in were rudely shattered when it was announced at the last moment that the Ippodrome had a race meeting and required the Capannelle ground for a car park at 1pm that day. Our second game duly “bowled off” at 8.00am in the morning! Fielding first, KCC made a satisfactory start by nipping out three before Ebenezer Tagoe (75) and that man Max, again, (35) removed the last vestiges of complacency with another 100-plus partnership. Belatedly, Sunil remembered that scribe was supposedly an all-rounder (this is before the back problem – you understand), and the two were soon both castled, and Capannelle’s innings ended on 182 (Sunil, Mike Barnes and scribe bagging three each). Bhaskar (57) opened with Clive, but a 50 run first wicket partnership was followed by nothing like as good, and with Ebenezer taking 5-55, and our star bat Steve being run out cheaply, KCC at 163/8 were in danger of a first overseas series loss when an insistent car parking man in an alarming military-style uniform threatened all sorts of evil if we did not vacate the ground immediately. Man-of-the-match: Ebenezer Tagoe for 75 and 5-55. 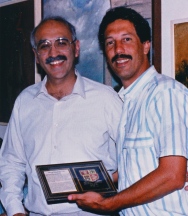 Pleased to retain our unbeaten record in Italy, KCC made the best of a bad job and repaired to the said racetrack, where KCC gambling addicts, having been unable to get any odds on the recent KCC vs Capannelle series to begin with, provided the local bookies with an unexpected fillip to their afternoon’s income.

Later that evening, suitably scrubbed and polished, KCC rejoined their Italian friends for a memorable dinner, during which souvenirs were exchanged (inset Sunil and Max), insults were traded, and firm resolutions made to do it all again. And if you thought there wasn’t much time for non-cricket activities, I must report the happy arrival of the Amar triplets in June 1988!

Capannelle did indeed visit England the following year (but that is a different story). 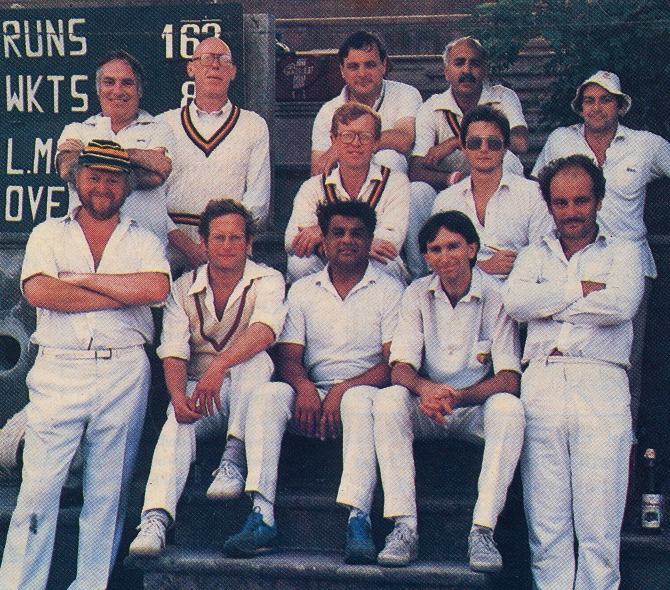 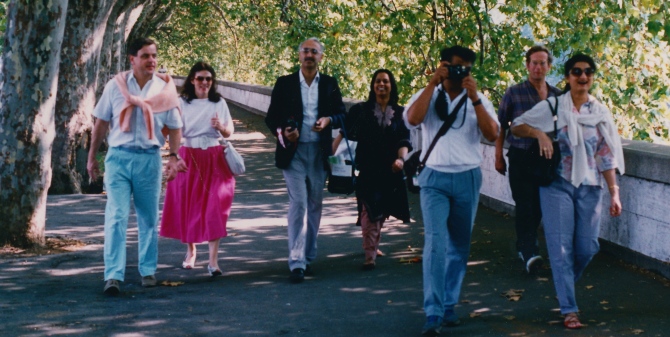 Strolling down the banks of the Tiber