Nestled in a valley in the Chilterns not far from Henley, Stonor Park was the home to this new KCC fixture. The setting was exceptional, the opposition an interesting collection of arty humanities enthusiasts. Unfortunately, the weather did not turn up in such style. In fact, the combination of mizzle in the air and an uncovered wicket put the game in jeopardy from the start, but the spirit of the V & A team ensured that the match would take place in the nowadays unusual format of time cricket.

Having won the toss skipper Nayar made the first “interesting” decision of the day and decided to bat, the misty rain still falling as the formidable duo of Jai Singh and Matt Syddall marched out to the middle. The fact that the top six then read like a list of Homeric heroes in the form of Shanker, Chaturvedi, Ledger and Gandadi was perhaps what had swung the decision to bat first. Matty scored 2 off his first ball and then didn’t trouble the scorers again, bowled by one that nipped back from Marsh. Amit followed shortly afterwards, then Nitin, struggling to find rhythm on the sticky dog of a wicket, succumbed LBW before Chris was bowled by Jonkers. In the 11th over the scoreboard read 24/4, with Marsh 2-13 and Jonkers 2-10.

Jai rested languidly on his bat at the other end, head bowed. The mighty tiger was not however subdued. He dug in to work through the middle of the innings with Harsha, who coming in at six managed to score at a good rate in difficult conditions, and by the time he was out for 31 the score had moved on to 70/5. Kensington were not out of the woods yet but with Jai’s glue-like innings holding things together, Saikat entered the fray at seven and these two warriors put on 56 together. Trench warfare it was, attritional stuff for most of the innings, but Jai fell on 59, Marsh returning to get his man. It was left to Saikat to heave a few, running out the Mighty Sarwar in the process. Neeraj decided that 145/7 from 42 overs was enough to send shivers down the spines of the V & A crew.

Tea intervals this season have been short affairs, but the V & A fellows had decided that despite the lack of opportunity to host as they usually would, it was time to open some sustenance-providing drinks. Whether this would prove to be performance-boosting only time would tell.

It was at tea that Neeraj made his second “interesting” decision. Eyebrows were raised as Matty loosened up to take the new ball with Seethal. However, the method in Neeraj’s assumed madness was about to be made clear. Whilst Seethal bowled his first 4 overs for just 3 runs (all wides), Matty sent down a double wicket maiden in his 3rd over, first bowling Pritchard-Gordon with a yorker, before a sensational catch by Amit at backward point, to dismiss Terblanche. Suddenly V & A were looking shaky at 13/2 from 7 overs. A further wicket for Matty’s leg spin in his 5th over, Harsha picking up an excellent catch behind, and a wicket maiden for Seethal, bowling Pritchard-Gordon the elder, meant that V & A struggled to 21/4 after 10 overs. However hard they tried they would not have done much more to match KCC’s first innings total at the same stage. Again, a middle order rescue mission meant that the game looked as though it might run close as Jaco Poynter and Ollie Marsh set about rebuilding the innings with gusto. Marsh succumbed to the wiles of Sunil for a breezy 22 but Poynter in particular was both riding his luck and looking dangerous. He had 58 from just 35 balls before Captain Fantastic realised that it was time to introduce himself into the attack. Neeraj, having been launched for 6 first ball struck with the final ball of his first over, another caught behind for Harsha. Neeraj followed this up with a wicket in each of his next two overs and the resistance was broken as V & A were reduced to 101/8. Due to the format KCC had to bowl out the opposition to claim victory, whilst the modest target meant that V & A were not necessarily out of the game. Neeraj once again turned to Matty who duly wrapped up the innings and bagged a fifer; V & A all out for 112.

There was a delightful sinking of Cobra before the even more jovial controversy of Jai being awarded MoM over Matty. The opposition were charming and most friendly, both teams retiring to the Golden Ball pub garden to enjoy the best weather of the day. Jai and Matty celebrated by buying a round for everyone and a bottle of wine for themselves. A great game but more importantly – a wonderful new fixture. 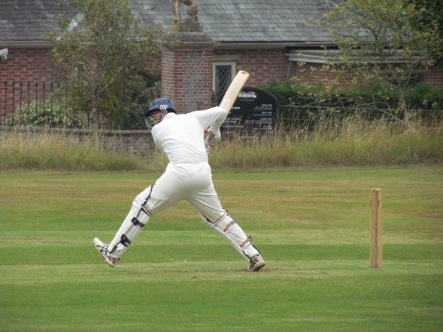 Jai Singh on the charge

Lunch outside the pavilion 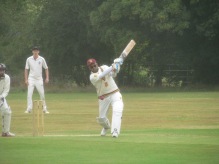 Saikat plunders some much needed runs

Jai dismisses a ball in an imperious manner 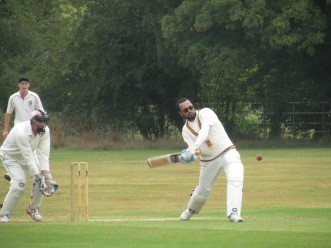 Saikat lines it up for yet another four