This fixture allowed us first sight of O&G’s lovely new pavilion with an overhanging roof under which we were able to take shelter from the showers that disrupted this game. It was just as well O&G collapsed for 70 as we were able to wrap up the game before the heavens really opened up.

O&G’s innings never got going with the top order taking too many Sunday liberties against disciplined bowling. Eddy and Khush ripped out the top order taking 3 for 15 and 2 for 13 respectively. Only two O&G batsmen, McCaughrin and Cox, reached double figures. Then David’s attempt to feed the opposition runs backfired as Atul with his gentle ‘please hit me’ off-breaks continued the rout with 3 more wickets.

Imran started the chase off but missed out on the opportunity to carry his bat. Gautom got himself out going for the glory hit to win the game. Atul serenely saw us home. Hartnett, a bowler for her county, was the pick of the O&G attack.

O&G, and their skipper Lars Mosesson in particular, were impeccable hosts and can console themselves with the thought that the boot might well be on the other foot in future years. 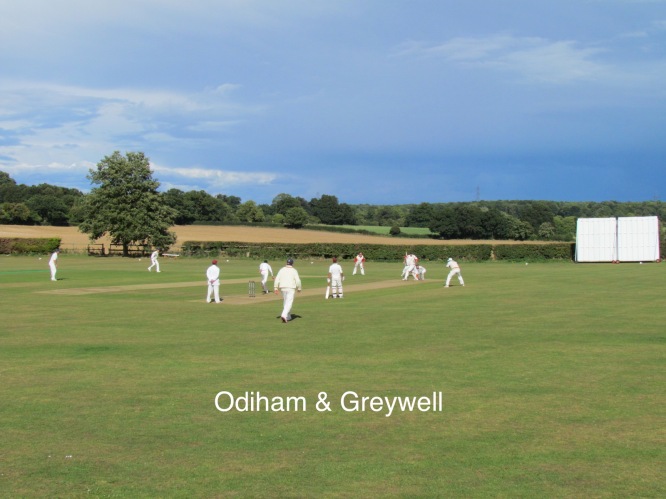 KCC won the toss and, with tea firmly in Sunil’s mind, elected to bowl first.  A first-over wicket from Jon Pickles and some stinging saves in the covers from Ian McLean kept Odiham quiet and, at 32 for 3, the decision to insert might almost have been justified on cricketing grounds.  Odiham recovered to 255/5, with Walker scoring 87 and Shorthouse an unbeaten 70.  KCC succumbed to a miserable 159, the highlight of which was KCC veteran San cracking Odiham’s left-arm Aussie quick bowler through the covers on several occasions, each time followed by a loud expletive and an inevitable bouncer next ball.  The lowlight was the last wicket, Jon Pickles palpably lbw to what can only be described as a pie.