On a warm and sunny late summer’s day, we once again visited Concorde at their delightfully picturesque ground. KCC batted first, with Neeraj champing at the bit to put on a big score as opener. Looking to make a positive start on an excellent batting pitch, he unfortunately smashed the ball straight to a fielder with just a single on the board, and then had to suffer watching the debutant with the impressive old Moghul name of Sherbuland Khan Babi, and Chris Ledger plunder over 150 runs for the second wicket partnership. After Chris was out, Gautom Menon entered the arena, and during a short but very entertaining innings proceeded to smash a succession of huge sixes, rushing to a quick-fire half century, whilst at the other end Sher safely proceeded to an excellent steady hundred.

In reply, Concorde lost a couple of quick wickets during a fine opening spell from Bernard van Vuuren, ably supported by the guile and tight line of Pammi Chaggar, happily welcomed back to the fold after a long absence due to illness. After that, however, the game was unfortunately overshadowed by a series of controversial umpiring decisions, involving a batsman not walking when nicking behind, a clear stumping not given, and a succession of vehement lbw appeals all turned down. Concorde went on to win by 4 wickets, but KCC’s habitual post-game camaraderie was notable by its absence. It was a shame that this somewhat tarnished the day, as most of Concorde’s team were very amiable and it’s a lovely ground at which to play. 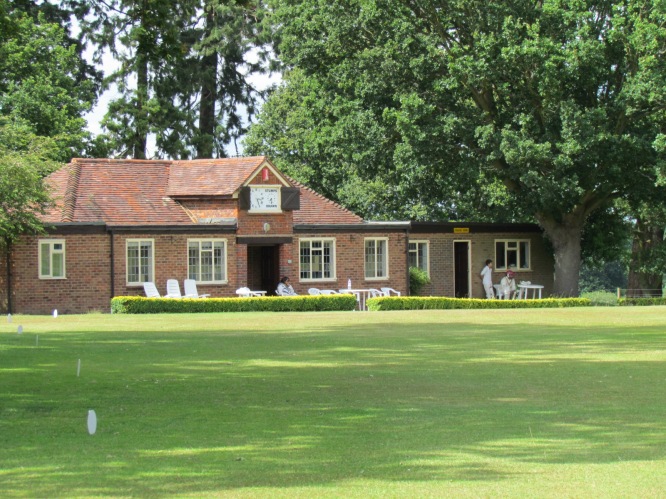 Kensington CC is a new fixture and therefore, we were not sure what to expect.  However, our interest was immediately pricked when they announced on arrival that they were sponsored by Cobra beer and Johnnie Walker and would be spreading largesse later in the day.

Using all the cunning accumulated over the 50 years of playing cricket, I announced before the toss to Neeraj Nayar, the Kensington captain, that I would be putting him in if I won the toss, and interpreting this to mean that we were a bit weak on the batting front, he sportingly elected to bat.  The trap was sprung!  Alex and Nick Freeman opened up to Mantha and Regan who both seemed determined to play by numbers and Nick Freeman’s first delivery duly hit off stump as Ravi attempted to pull a well pitched up ball over square leg.  Even Nick looked bewildered at this act of extreme generosity.  However, no 3 (San Gore) was a very cultured right hander who looked unhurried and eased his way gently to 25 before getting a thin edge to Ian Cudworth, which brushed the keeper’s svelte like hip before being snatched before the turf by an alert Nick Wright at slip.

Their number 4, Martin Sumpton, initially appeared to have no other shot than a lurched forward defensive and following the dismissal of Regan by Ian, who was bowling an inspired spell, he was joined by Mark Rattigan who appeared to have attended the same school of batsmanship.  However, they finally began to play some shots and Nick Wright was introduced to the attack to provide some variety, a tactic which brought almost immediate dividends as he got both batsmen out.  Neeraj was stumped soon after (127/6) but then his son, 13 year old Stefanos Nayar, batted with complete aplomb in accumulating 37 including a straight six and, accompanied by ex-Under 19 Italian national player Giorgio Scalco, put on 65 for the 7th wicket before Stef was bowled by the returning Ian.  The innings was declared soon after when the score reached 205 for 7 off 45 overs.

It was all important that we got off to both a safe and a reasonably quick start with no more than 40 overs available to us and the Captain took on the responsibility in company with Nick Freeman.  The Skipper struck the ball with some freedom in making 34 and the partnership reached 65 from 17 overs before Jerry was dismissed for 34.  Joel Breen joined Nick Freeman and the pair found the going quite hard against some decent bowling and Nick was bowled aiming a big blow.  Nick W joined Joel and the two boyhood chums set themselves for a big effort.  Nick was into his stride quite quickly and immediately eased the pressure with 14 off an over but other than one beautifully timed shot through cover, Joel was still struggling to get the pace of things and with a slowish outfield it was hard work and soon the rate was up to 7 an over.

But we shouldn’t have worried!  Nick began to unleash some big shots and suddenly Joel broke free and began to join the party.  3 huge sixes over square leg from Nick and a straight driven six from Joel and suddenly the rate was coming down fast.  Having reached a Concorde best of 45 off 51 balls, Joel was unexpectedly bowled with victory in sight and Alex came in to smite his second ball for a straight six to finish the game with 3 overs left.  Nick was unbeaten on 73.

Following the game, the opposition provided a case of very tasty Cobra and then made a presentation of a bottle of Johnny Walker black label to Nick as man of the match.  We reciprocated with the presentation of a large bottle of their own Cobra to young Stef Nayar who was swiftly relieved of the bottle by his proud father. 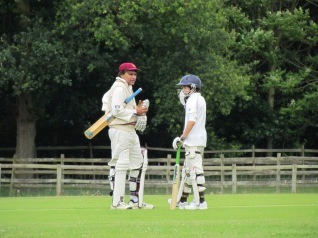 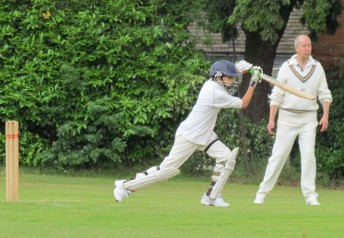