The last game of the season was our first fixture against Kew. Playing on the pretty and historic Kew Green ground, where cricket has been played since the C18th, was an attractive prospect, and we were all much looking forward to the game. Chris Ledger lost the toss and KCC were inserted; this looked a bad toss to lose, given a very green pitch, but as it turned out the wicket was much truer than it looked.  Openers Jai Singh and Praveen Lekhraj put on a rapid 45 before Praveen departed. Jai played imperiously for his 47 in as many balls before losing concentration and getting bowled by a full toss. Then Nitin Chaturvedi and Rohan Ghosh continued to pile on the runs in an exhilarating 131 run partnership for the 3rd wicket. But the star batsman on the day was Nitin, who went on to score a superb, chanceless and unbeaten maiden century for the club, taking us to a fine total of 253.

In reply, Kew never looked likely to match our total, wickets tumbling at regular intervals in the face of excellent KCC bowling. A threatening opening spell from Adam Sumner and Saikat Barua kept the Kew scoring rate down and the pressure up, before Amit Kumar and our spinners took advantage as Kew tried to increase their slow run rate. Despite one or two lusty blows from the lower order, Kew were in the end well-beaten, falling 52 runs short, bowled out within the allotted 40 overs.

Kew Green is a lovely place to play, but if the fixture is renewed we hope it will be played more in the traditional spirit of a friendly fixture rather than a Saturday league game.

The pavilion at Kew 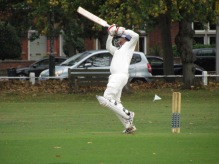 Jai punches off the back foot

Viewing from the pavilion 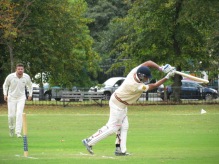 Watching from the pavilion 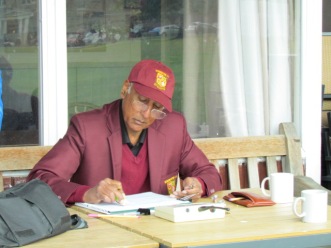