Despite the threats of rain we managed a complete game in our season opener and finished with a resounding win. Northfields captain David Redhead won the toss and elected to field on a green track in overcast conditions with an icy wind blowing.

Richard Kent of Northfields made the breakthrough in the first over to support his captain’s decision to bowl first when Shahzeb Mohammed top-edged one and was smartly taken on the fine leg boundary. Number 3 Stefanos Nayar and other opener Amit Shanker consolidated the early loss and formed a decent partnership of 65 runs. Stef looked in great touch, hitting 7 quick boundaries before being bowled by Garner. Birthday Boy John Behar came in but sadly went back without contributing. Was this going to be the start of the usual mid-order KCC collapse? This time, however, debutant Praveen Lekhraj managed to stop that with the support of Amit. These two added 49 runs before Amit nicked behind off Rathore’s bowling (114/4). KCC skipper Saikat Barua was next in to help his team to get to a respectable total to defend. The rest was history, literally! The hard-hitting Saikat and the elegant left-handed Praveen took full advantage of anything loose from Northfields bowlers – and there were plenty. They put on 164 runs in 120 balls and broke the club record partnership for the 5th wicket that had been standing for 22 years. Both batsmen were in no mood for mercy, smashing 8 sixes and 15 fours between them. Praveen fell in the penultimate over after a well-made 79 and Saikat remained unbeaten on 87. At the end of 40 overs, we had reached a challenging total of 287/5. David Garner was the pick of the Northfields bowlers with 2 wickets – would have been more if the catches had been held.

An excellent tea was served with some delicious curries and breads. Perhaps because of it, all our bowlers were warmed up and Northfields innings never really got going. Wickets kept tumbling for the hosts once Wajid Tahir made the breakthrough. Sid Chhibbar and Neeraj Nayar were most lethal, both claiming 3 wickets each. Eventually, Northfields were all out for 126 in 33 overs, falling well below the target to hand KCC a huge win by 161 runs – certainly a brilliant birthday gift for KCC legend, John Behar. Happy birthday, John.

A post-match presentation was held in the pavilion where Akshit Rathore was awarded the JW Gold Label for his all-round performance for Northfields, and Saikat received the Cobra for his unbeaten 87. We look forward to the game next year. 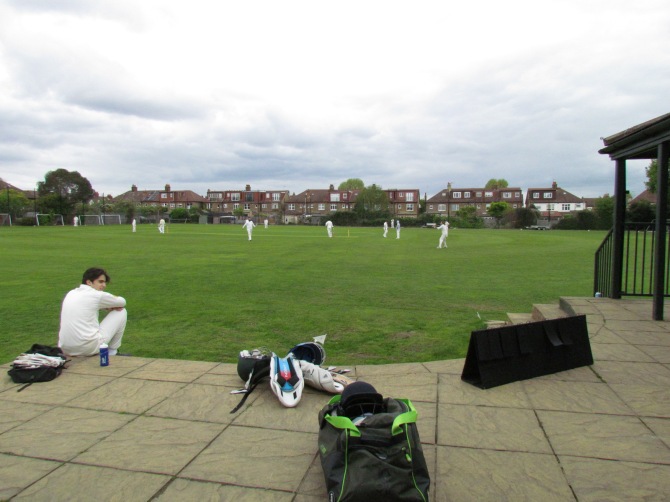 At Northfields on a chilly April day 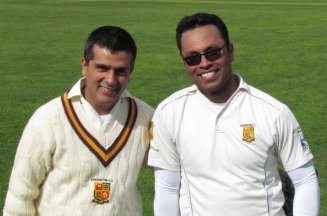 New Record Holders for the 5th wicket – Praveen and Saikat

Stefanos sets the pace with a quick-fire 35 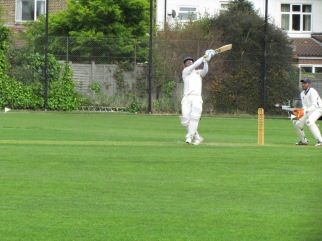 First match of the season, and with the Northfields pitch a bit of an unknown we asked our hosts to bat first after winning the toss. Ryan Konson bowled a terrific opening spell, new South African recruit Wesley Johnson at first change was threatening but unlucky, and Sid Chhibbar bowled excellently to slow down the run rate, but even so Northfields piled on the runs to set us a challenging target of 235 in their allotted 40 overs. No. 3 batsman Jeewan Singh was the Northfields star – he survived a dropped catch or two, and rode his luck with a few skiers falling between fielders, but ended up with a fine unbroken century.

The manner of Kensington’s reply was astonishing. Opener Sana Phoplankar, a friend of Ryan’s playing for KCC for the first time, rapidly made up for dropping Jeewan Singh early on by smashing 16 off the first over, setting the tone for what was to follow. Northfields briefly thought they were in the game when skipper Chris Ledger was out next over for a third ball duck, but after that it was Kensington all the way, and at a spectacular run rate of nearly 10 an over. Both Sana Phoplankar and Preetinder Singh batted extremely well, putting on successive century partnerships with Kamrul Hasan, but it was Kamrul’s innings in particular that especially caught the eye.

Batting superbly, he scored a sparkling hundred in just 70 balls, capping it off by hitting the winning runs with a 6 in order to reach his century. To chase down 235 in a 40 over game is no mean feat, but to chase it down in less than 25 overs was truly extraordinary, and will live long in the memory of all of us who were there. What a wonderfully inspiring start to the season. Bravo!

Four seasons in one day but no rain so we had a game. With Saikat Barua injuring his finger whilst fielding for Deutsche Bank the previous day, San agreed to make up the numbers after his lunch date and said he’d be back after tea to field. David duly agreed to be inserted by the opposition.

Shahzeb carried on where he left off against Deutsche Bank clouting a six over long on in the third over. If the idea was to dominate the bowlers, Hesh and Kent, it backfired as Shahzeb edged behind next over.

Akhi and Bharat steadied the ship. Bharat put away the bad balls whilst Akhi kept out the good ones. However, wickets soon tumbled. Akhi, Bharat, Regan, Pammi and David were out in quick succession. Thanks to Ali and Khush, we limped to a sub par total of 137. Hesh was the standout bowler for Northfields, well supported by Russell and Harry Fawkes (no relation).

For the record, San returned to the ground a few overs after tea (with bat!) and fielded at gully, point and leg-slip. 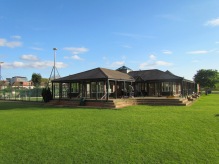 The pavilion at Northfields

Following yet another disappointing cancelation by the Crossbatters, a fixture with Northfields CC was arranged by San via the Cricket Conference (aka CCC). Located in Ealing, the Northfields ground proved an easy commute for Kensington’s army of hopeful and/or recent daddies, released as they are with limited expiry day passes on select Sundays through the cricket season. For a change, we all arrived well in time. Even practised some drills. After Rohan lost the toss, Sunil, who incidentally lives closest to the ground, decided to go play golf instead. Young Sumaer was volunteered as a worthy and willing replacement.

The match started with a clatter of boundaries. Wayward bowling from Seethal and Ajit was dispatched to the boundary by the Northfields openers. Sunil then arrived in his silver (or is it Presidential black?) Mercedes, waving triumphantly as Presidents do. After dropping Sumaer off at the top of his run-up (literally), he sped off amidst a round of applause from all, much to the opposition’s bemusement. The match soon resumed with Sumaer charging in. Full toss. Leg stump. Smashed for six. Oh no! Pep talk from skipper Ro at mid-off and Sumaer was back on the horse. Full toss. On leg stump. Again. But a quicker one this time. Pinging the batsman on the pads. Big appeal. He had his man. Although a friendly decision, one thought. Probably missing.

Thereafter, whilst Sumaer maintained a steady pace and aggression from one end, unlucky not to pick up a bagful of wickets, the story was not the same at the other end. With the accompanying steady drizzle, gripping the ball proved difficult, even for Shahzeb behind the stumps. Plenty of byes and wides challenged our stopper back(s). Northfields’ second pairing took full advantage and took their score to 115/1 in the 19th over with opener Harry Fawkes completing a streaky fifty and No. 3 Singh scratching his way to 35. Saurav and Khush soldiered on and were duly rewarded with three wickets each. Although, it must be said, that once we had the top order back in the hutch the rest of the Northfields line-up folded tamely, collapsing to 177 all out in the 36th over. Extras top scored (nearly) with a thumping 50 not out.

Shahzeb Mohammed and Jai Singh opened our innings on a pitch that now resembled a wet sponge. Whilst Jai, David “golden-duck” Behar and new lad Gautom Menon all struggled, Shahzeb immediately went to town, harassing the fence with some ferocious hooks and pulls. He raced to his fifty in just 30 balls. Predictably, just when it looked like no one else would need to bat, Shaz was out, skying one somewhere. No one quite remembers. It was dark and gloomy. Cold.

Anyways, 71/4 in only the 11th. Calm heads were required. Rohan and San set about things and soon flourished in a 95 run partnership with dabbed singles, straight driven fours and delectable late cuts and square cuts. San hit a sumptuous straight six and Rohan a delicious cover driven boundary. Back in the pavilion, nerves settled and before long we were home with more than 11 overs and five wickets to spare, just before the rain descended.

One thought on “Northfields”