Owing to a mix up by the new fixture secretary at Blackheath we found ourselves short of a game for this weekend, but luckily we managed to find one in Ilford through the Conference – Frenford, short for ‘Friends of Ilford’ we were told. At the toss Jamie was informed by his opposite number that as it was Ramadan his whole team would be observing a strict fast during the day, not even a drop of water. So naturally, Jamie decided to bat first on this rather warm afternoon.

We didn’t start too well in this 40 overs match. The bowling was fiery on this typical park wicket and we lost 3 early wickets, including that of Tim who was trapped LBW after a quick 22. Harsha landed a few blows but rashly holed out just when we were regaining momentum. It was new recruit, Chetan Malhotra, and a watchful Rohan who put together a 45-run partnership. The wheels came off again, though, as we slumped to 109/6 with 14 overs to go. Enter skipper Jamie at his belligerent best. He pulled and drove powerfully as the parched fielders wilted under the onslaught. His fifty came up in 44 balls to raise a fifty partnership with the supporting Amit Kumar, before being caught in the deep. 195 after 40 overs was a very defensible total.

After tea (only us), Adam and Bernard tore into their top order, Adam getting a wicket in the first over and Bernard 3/34 in his 8 overs. Amit Shanker chipped in with one and Frenford were reeling at 59/5. Sunil was brought on with his accurate dibbly-dobblies and together with Amit Kumar’s gentle pace the runs totally dried up (like the batsmen’s throats). It was only a matter of time before desperate heaves found the fielders. It was left to the returning Adam to take the last wicket with 7 overs to spare.

The presentations were one-sided as the opposition had disappeared in search of food in the fading light. Jamie awarded himself with the Johnnie Walker for his fifty and we all enjoyed the extra Cobras.

Frenford ground in Ilford – no Blackheath this! 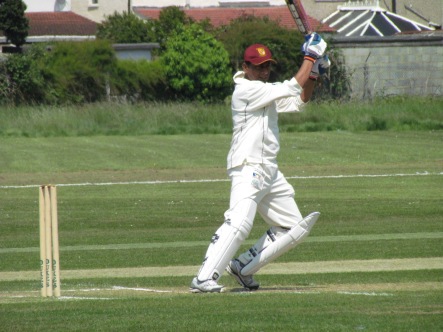 Amit Shanker square cuts straight into the hands of point 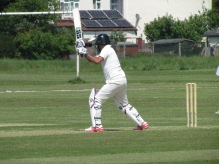