So on to Wembley, where in our inaugural match last year we had an exciting winning finish. Saikat won the toss this year and decided to bat in a strangely designed time game – 20 overs in the last hour but a minimum of 17, whatever that meant! Our plan was to put quick runs on the board and declare early enough to bowl out the opposition.

The first hour of the game followed the script as openers Chetan Malhotra and Amit Shanker put on a fine partnership of 87 scoring at nearly 6 an over. However, both openers failed to capitalise on their brilliant start and fell before reaching their fifties. Rohan and Raheel Khan (a friend of Shahzeb) steadied the ship. They were playing well until Raheel (27) was bowled by Vinushan, a spinner who was proving to be quite a handful. Then the “KCC inevitable” happened – i.e. a middle order collapse, where Pritesh Patel (playing his first game), Saikat and Rohan (25), all got out in clusters. 151/3 became 166/6 and the idea of a declaration seemed a far cry. However, with some late contribution from Tabrez Khan (32*) and Neeraj Nayar (19*) we declared at 212/6 with enough time to give ourselves a chance to force a win (or so we thought).

A delectable tea was served in the break but skipper Saikat’s battle strategy was scuppered when told the unfortunate news: KCC’s old soldier, Chris Downes, ruled himself out of bowling due to a knee injury sustained while warming up to bat! A quick change of plan and Neeraj opened the bowling alongside Eddy. This wasn’t a bad move at all as both the bowlers created at least 4 chances in the first 4 overs but not one was taken in the slip cordon. These early reprieves allowed the openers to play freely to put on 71 runs for the first wicket. Saikat brought himself on for a fiery burst and removed both openers. Other bowlers however lacked the required venom to remove the next pair, Bhushan Parab and Vinushan Iyngaran who attacked the bowling with ease in a 130 run unbeaten stand that saw Wembley comfortably home with 10 balls to spare, or was it 28 balls given the weird minimum overs rule.

Later in a short presentation, Vinushan was awarded the JW Gold Label Reserve for his all-round performances and Chetan Malhotra received the Cobra as man of the match from the losing side. The lesson from the match? It’s the same old saying “catches win matches”.

Chetan Malhotra fires on all cylinders 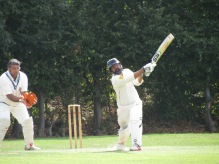 A six for Chetan 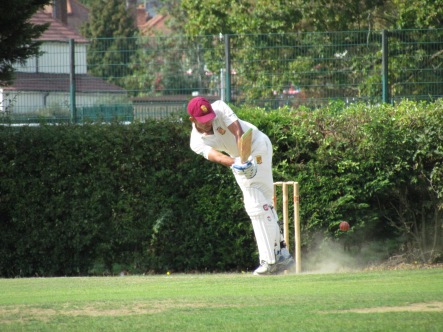 Eddy delivers – but not wickets

A few frantic messages were sent out pre-match requesting extra KCC sweaters with a forecast maximum of just 15 in this late season fixture at Wembley.

The hosts (sportingly) decided to bat on a proper green top of a deck. Rohan and Chetan found early life in the pitch, but Wembley opener Rizvi took an aggressive approach hitting 3 large sixes. Sid and Saurav took up the bowling at 51 for 0, which yielded immediate results with Rizvi caught to a sharp catch in gully. The pair’s tight line and length sparked a middle order collapse that left Wembley reeling at 94 for 5.

Parab and Azar were obviously quality batsmen and were able to stabilise the innings for Wembley down the order. The big frame of Azar was particularly ominous as he started to find regular boundaries, prompting Saikat and then Amit Shanker to enter the attack. This slowed down the run rate and with Amit removing Azar in the final over KCC required 202 for victory at close to a run a ball.

Stefanos and Neeraj were both removed early by some neat in-swing from the Wembley opening bowler, but the promoted Saikat and ever-cool Amit gave us just the partnership that was required to take the chase to Wembley. An old message from Saikat pre-KCC debut was unearthed during the week, bringing attention to the fact that in the early days he called himself a top order batsman. This innings showed why, with a mixture of beautiful straight bat defensive work intertwined with brutal lofted drives and flowing back foot cuts.

When the 20 overs were called with light fading and rain looming, the run rate was still around 6 an over. Saikat fell soon after for a well-made 66, but with Rohan and Tim coming together to take up the chase KCC stayed on the front foot – literally. Both Rohan and Tim were able to find gaps through the cover region and with one key over they were able to gain 17 runs and take the ascendancy away from Wembley.

A return to the opening bowling of Azar didn’t slow things down, and even though Rohan fell within sight of victory, Sid strode to the crease to back up his 3 wickets with a crunching shot through covers for four, and victory was secured with 2 overs to spare. 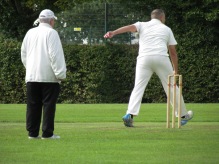 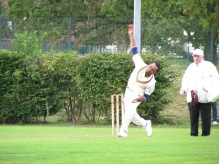 Saikat bowls but with no luck 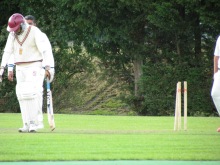 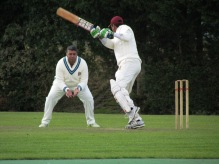 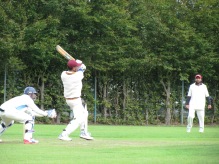 Saiks Six (one of seven)

Amit pulls in a stand of 83 with Saikat 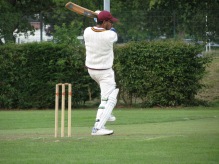 Saiks off the back foot this time 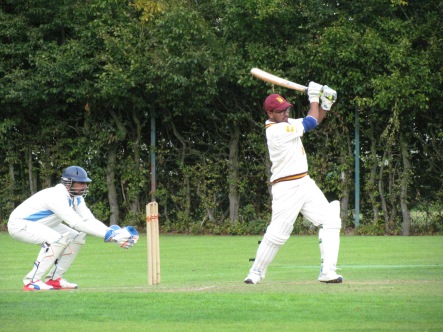 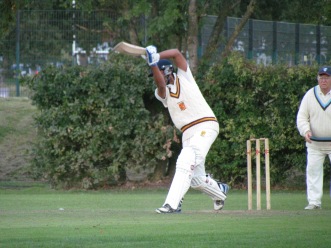 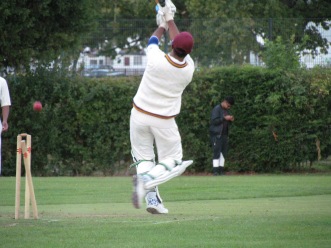 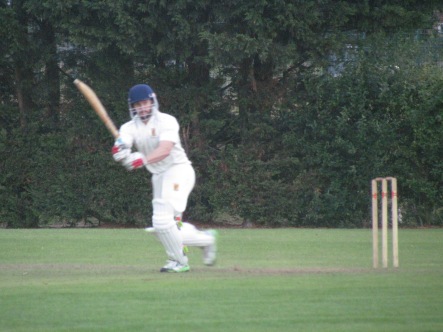 Tim puts the knife in as rain threatens to disrupt