Kensington Cricket Club is a diverse repository of wisdom. On any given weekend you can receive unsolicited advice on neural pathways, online marketing, global equity derivative markets, real estate, meditation, cars, refreshment venues, TV box sets, organic farming, women, men, pets, politics, cuisine, music, international and local travel, literature and flooring. Sometimes cricket. Some of it accurate. As captain briefly you become an attractive target for such advice. Leading into this game, however, Matty received only one direct recommendation – ‘Heads’. He’s a tails man himself so ignored it and so Kensington were invited to bat. The toss is quite a big deal around here. You don’t want to bat first. Worse, Household skipper and torturer-in-chief of Kensington batsmen over recent years, Steve Nutt was just a few wickets short of 500 for the club.

We started poorly on what is always a tricky surface, 3 down with just 23 on the board. Tabrez had dug in brilliantly and Deepak appeared to be through the worst when he lost his wicket to Nutt who was now just a last mile short of the stone. Sid didn’t last long but Saurav gave us another lesson in buckling swashes, forcing Nutt to pull himself off. Tabrez finally fell for a fighting 42 before Bernard joined Saurav for a miraculous 72 run partnership in just 50 odd balls that rescued the score, hitting 3 sixes before Nutt finally cracked the 500 barrier. Given his excellent 5-fer, 178 felt like a decent score.

A weaker than usual Household batting order was quickly under pressure, Bernard backing up his fine innings with a wicket in each of his first overs and, when Tom Skirrow’s patient knock came to an end at 60/4, Kensington caught a whiff of victory. Nick O’Neil, however, rode his luck with some good hits, and without the help of oxygen at the rare altitude of number 5, to make 71 off just 49 balls and put the Household right back in it. I lost count of how many catches we missed in the last 20 overs but it was a tragic effort in the field. Fittingly Chris Schleter, pick of the bowling alongside his captain, was joined by Steve to finish us off in a measured stand of exactly 50.

We thought we had this one but dropped chances really handed the initiative over and it was a gutsy, quick chase from the home side to win it. Congratulations to Steve Nutt for his 500 wickets, may he take another 500. Just not against us. 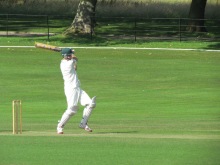 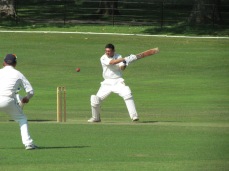 Saurav drives to be top scorer on 44 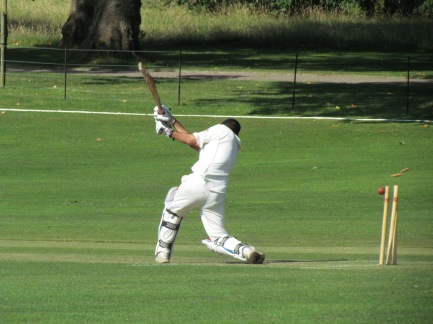 Bernard captures 3 for 29 in a fine opening spell

Deepak follows that with 3 for 45

Win the toss and field, so Matty calls it wrong!

There is a particular format to games down The Farm that means you have to field first, Local superstition dictates a fixed tea and just one new ball for the game. Not totally unusual but potentially a bit limiting for the side batting first. Effectively there is little leeway in declaration timing so unless Shahzeb tees off and Stevo tees off and Nitin tees off and Deepak….

Moan, moan, moan. The truth is everybody watched Neeraj and Ravi Mantha work hard against the new ball, Ravi in particular getting manfully behind the line for his 7 in 42 balls, before the middle order did indeed tee off and to a man teed out. Pammi batted with great patience and skill on a jaggy pitch while Charles Hollingworth, ably supported by Morrissy (3/17), eviscerated the Kensington batting, taking 7/29 in an excellent 12 over spell. Helped by Abid and the egregiously under-batted Saikat, Pammi held the fort long enough for KCC to reach a skinny looking 129 all out.

Upset by the lack of something hard and shiny to work with, and a grumpy dispensation of ends by his skipper, it wasn’t until the 9th over that Bernie had a chance to turn things around. He immediately bowled Baker and Glenn with superb consecutive inswingers but this only brought Hollingworth to the crease. He quickly got the measure of things, thumping 16 boundaries in his 89* to see the Household home easily in 32 overs.

Very much the Household and in particular Hollingworth’s game then, but future captains should still seek to field first and hopefully put on a better show than we did.

After squirming through scrutiny at the Shaw Farm gate and showing off the beautiful surroundings to our traveling guests, we won the toss and batted first. But, from the outset, our top order batters struggled to time the ball on a sluggish pitch. It took us 27 overs to get to a 100 with the loss of 4 wickets. With time running out, Shahzeb and Rohan stepped things up with a bit of slap and dash in the middle order and the innings was declared at 173/7 in the 42nd over.

In reply, the Household found the going even tougher against our opening attack of Saikat and Scott Murdoch who had our opponents reeling at 28/4 in the 12th over. Scott in particular was terrific, bowling a tight line and length in his spell of 7-3-8-2. Inexplicably, the Household then decided to pull down the shutters and despite loads of overs and wickets in hand, batted out the rest of the evening. When stumps were drawn in the 36th over, the scoreboard read 143/4, just 31 behind the target. It wasn’t exactly the best advertisement for cricket.

Play at Royal Household, Frogmore – with Windsor Castle as a backdrop 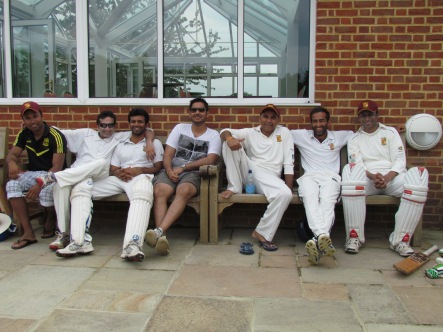 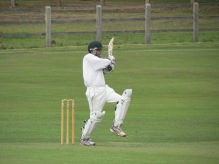 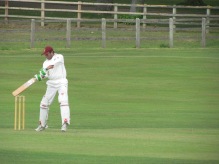 Amit steers one for four 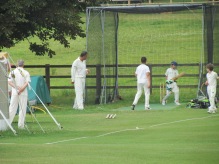 Kids at play in the nets 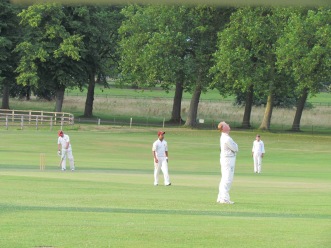 Ledger loses interest as the match heads to a boring draw

Presentation to Steve Nutt for his 5/47 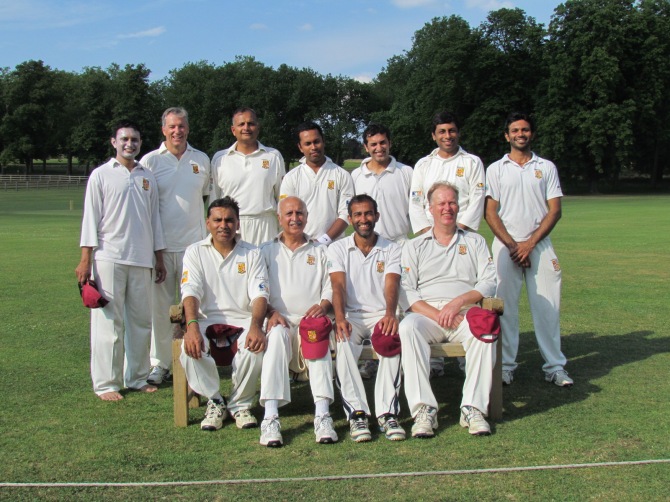 With the weather forecast suggesting that heavy rain was almost certain to arrive at Windsor by early evening, Chris and the opposition skipper agreed to reduce the game to 30 overs each.  As it turned out, the rain started to fall almost immediately the game finished, so this was probably the best decision of the day!

Royal Household batted first and, adopting a surprisingly defensive approach for a 30 over game, found it very difficult to score off tight KCC bowling.  With pacey Eddy Barreto and promising new recruit medium-pacer Scott Murdoch bowling from one end, and spinners Neeraj Nayar and Gabriel Thomas wheeling away from the other, Royal Household became so bogged down that after 20 overs they were just 63 for 4.  Over the last 10 overs, however, RHCC’s fifth wicket partnership, playing in a much more aggressive style, staged an excellent recovery.  Scoring at an average of nearly 9 an over, they took the total up to a respectable, but still well below par, total of 150.

In reply, KCC openers Jai Singh and guest Mark Walton made a steady start, with Jai the dominant partner, as they put on a solid and safe half-century opening partnership.  After Jai’s dismissal, Mark stepped up not just a gear, but many gears, increasing his scoring rate remarkably.  Having taken over 30 balls to make 4 runs, he then scored at well over a run a ball for the rest of his finely judged innings.  In a well-deserved Man of the Match Performance, he reached an excellent half-century, and shepherded KCC to victory with 7 balls to spare.

The Olympic traffic we had been warned about never really showed up. Everybody was either frightened off the streets by Boris Johnson or drawn towards Hackney, their senses overwhelmed by the twin joys of Sebastian Coe and Claire Balding. Heading west to Windsor was a breeze.

We won the toss and elected to bat. Job done. As Matty says “I have yet to read ‘The Art of Captaincy’ by Mike Brearley, despite the almost constant advice of my team-mates who must be on commission or something, but I can’t see how he strings the whole thing out, page after page. Win the toss (by calling tails – little secret there) and bat. Beyond calling tails I’m not sure how much art there can be in it.” So to the game.

Steve Nutt is not likely to be granted the freedom of Kensington anytime soon. He trundles in all maidens and length and disturbs us no end. ‘Take a blow Steve’ we urge. ‘Put your jumper on and have a wee rest somewhere quiet. First slip maybe.’ Deaf ears. To start things off David Behar was put out of his misery caught behind at the other end, off Jones. Then Nutt did his damage, bowling Jai, who had looked in good nick on the back of his ton at Warborough, trapping Ro between the umpire and the pads somehow, just when he was starting to flow, and sending Saurav back for a duck. Neeraj had drafted tennis buddy Pete Griffiths into the side and he timed the ball sweetly before Stefanos unfurled a few lovely shots at the end. It was Tabrez who provided the hard centre however, playing really well throughout, finishing unbeaten on 68 from just 61 balls. Hard work for 189. We hoped it would get harder.

The Household innings started perfectly. The ball jagged about and Bharat had Peter Wilson caught calmly and brilliantly at gully by President Amar. After that things went a bit flat. Deano patiently batted through for 69 not out while Andy Croft got what we later learned was his first half-century, flipping the ball with great timing for 12 fours in his 66. Neeraj bowled his usual mean, accurate spin and did put a brake on the Royal progress but it was all a bit late and young Ben Wilson had free rein to batter a quick 38, putting all Kensington hopes to bed.

Not sure what Mike Brearley would have done about it but Matty has ordered his book off Amazon. 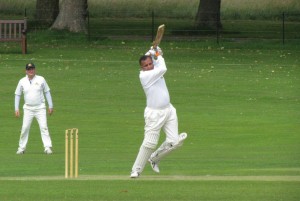 We were put into bat on the usual low and slow wicket that has deteriorated over the years.  Jai Singh and Usman Azam began brightly putting on 55 in ten overs until Jai, not looking his usual self on his happy hunting ground, could not repeat his heroics of previous years and was comprehensively bowled.  Soon after, Usman was adjudged lbw by the neutral umpire…hmm. 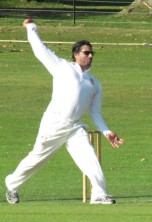 Amit Shanker and skipper Neeraj Nayar dropped anchor and the run rate dropped appreciably.  The departure of Amit only made Neeraj batten down the hatches further and when he finally perished having a heave we were just 158/5 with few overs to tea.  Thanks to a late charge by John Behar (14 in 10 balls) we got up to a barely respectable score.

The Household were always on course for a win once the Kiwi ‘ringer’, Chris Morgan, and Deano got going in a 62 run second wicket partnership.  It was good to see the return of off-spin bowling legend John Behar (inset) wheeling away and being treated with respect by the batsmen.  But despite various bowling combinations, Morgan took a fancy to all our bowlers, John Behar honourably excepted, and hammered a brutal hundred to see the hosts safely home with 4 overs spare.