KCC did something new this season – moving away from tradition we took part in an inter “corporate” competitive T20 tournament, and all for a good cause. KCC participated in the CRY T20 Corporate Cricket Challenge – which is a tournament held at Regent’s Park every year, organised by Child Rights and You, an India based charity NGO helping underprivileged children in India.

CRY strives to ensure children’s rights are met and kids and their communities are informed about their rights. CRY’s projects include access to free and quality education, primary healthcare and providing environments for children which are safe from violence, abuse and exploitation. Some of the stats are staggering – 10m child labourers between 5-14 yrs, every 8 mins a child goes missing in India, 3 out of 5 children are malnourished, 850,000 children die before their first birthday, and 1 in every 3 girl-brides in the world is in India. CRY plays a role in direct action addressing critical needs, community mobilisation, planning, monitoring and advising on policy.

To raise funds for the organisation, CRY UK invites 6-8 corporate teams to play the tournament and the entry fee of GBP 1,600 goes towards the charity. The KCC committee thought this a noble (and novel) way of including some competitive cricket into our season and with the help of some negotiating on entry fee, a few generous donors and a subsidy from the KCC treasury, we fielded a team.

Much excitement at the prospect of participation, and with the other teams all being Indian corporate teams, you could expect it to get very competitive – not the good spirited happy banter of our usual Sunday cricket. Think of it, if you may, as our game against a certain banking side, a fixture now discontinued.

We selected our best (or perhaps fittest) team for this high-intensity T20 cricket tourney, and got Deepak Ramachandra who introduced us to CRY to be match manager. There was much strategising on the match managers’ WhatsApp group, careful assessment of each players skills (or lack of!) to decide the playing XI and strict instructions were given – arrive at the ground 45 mins early, only KCC gear to be adorned, pre-match warm ups designed, team talk rehearsed and match day 1. We were treated to our biggest surprise yet – KCC had all 11 players, dressed in full KCC gear on the field 45 min before the game and they went through the drills – ground fielding, catching, throwing, bowling – clearly pumped for the two group matches.

Game 1 vs Lebara, the reigning champions of the CRY T20 Corporate Challenge. A small scare right at the start with the early loss of opener Amit Shanker in the second over but an inspired decision to send Varun Sarna at 3 helped not just steady the innings but set off a flyer from Nitin Chaturvedi – 85 off 51 balls that included 12 fours and a massive six. Two quick partnerships with Shahzeb Mohammed and Adam Sumner, topped off by a cameo 20 off 12 by Deepak Ramachandra got us to 202 at the end of 20. It would have been higher if we hadn’t graciously lent two fielders to the opposition throughout the innings. Still, a very impressive and competitive total albeit the boundaries are small at Regent’s Park.

The daunting target proved too much for Lebara but the display from KCC in the field would have made 75 a competitive total; Lebara limped to 53 all out. Bhanu Baweja a new KCC recruit was superb, with his 5-step run up and thunderous shoulder ball, Eddy Barreto was impeccable in line and length, and the general outfielding was outstanding – attacking the ball, restricting the singles, taking some spectacular catches (wait, what? not a single catch dropped in a KCC game!?), backing up for overthrows, even a direct hit by Varun for a run out….KCC scaled levels never seen before.

Game 2 vs NIIT, no geeks these techies are always a strong side.

A steady innings this time with a solid start from Nitin and Amit Shanker, but our middle order was restricted by some good bowling – losing wickets periodically and the run rate falling to 7 and over…felt even slower when compared to our game earlier in the day when we were scoring at 9-10 through the 20 overs. It took the cool but powerful Adam Sumner to knock off a few boundaries at the end to help us finish the innings at 150. Would it be enough?

And KCC sparkled again on the field. Outstanding bowling from Bhanu and Eddy to start, restricting the scoring in the first 5 overs; Bhanu conceding just 11 in his 4 overs, Eddy 20 off his 4 with a vital wicket. But the fielding was our standout feature (who-wud-have-thunk-it??) – David Behar swooping from cover to knock the stumps down – run out! Varun and Nitin taking very smart catches at gully and point. The pressure from our fielding helped our middle-over bowlers take wickets at crucial intervals, strangling the batsmen for runs and another great bit of fielding in the outfield by Seethal for a run out to win the game….NIIT all out at 103.

If this was the level of intensity (I dare say, professionalism) on display, maybe we ought to be playing more competitive cricket at KCC. That would prove to be a thought too soon…..

Game 3 – Semi-finals vs TCS, last year’s runners up. But if our form from Day 1 was anything to go by, we had a shot at the Cup. We even have our star batsman Tim Keleher in the side today along with pacer Saikat Barua.

But normal service resumes at KCC.

It’s match time, KCC are 3 players short….the warm up was largely spent on the mobile phones trying to trace our opening bowler, our keeper and key batsman. This is a tournament game so it gets under way on time – we are bowling first, without our opening bowler and with 8 on the field. The missing three arrive 5 overs into the game, but the rest of the game was KCC classic – catches dropped, I believe 5 of them…bowling was too short, too full, too wide…anything but too good. We pull it back a little but concede 173 at the end of 20 overs.

Need a strong start, Tim and Nitin, arguably the best opening pair KCC have had in a while. We lose Nitin in the second over, putting the brakes on the run scoring immediately. Tim, the ever reliable, scores a run-a-ball 29, a good partnership with Varun taking us to 62 at the end of 10 overs. Still behind on run rate but with wickets in hand, we still had a chance.

Then disaster strikes, Tim gets caught at midwicket, Varun caught and bowled and Shazheb bowled going for an ambitious hoick. KCC 73 for 4 needing a 100 off the last eight – Deepak and Adam at the crease and there is hope. The bowling is tight giving nothing away, and we lose Deepak, bowled by Jijin, trying to force the run rate after a couple of sixes and a four is. It leaves Adam and Amit Shanker to get 45 off the last three. A late flourish from Adam (inset) with 3 huge sixes, almost had us snatching victory from the jaws of defeat. Requiring a six to win off the last ball, Adam heaved but only managed a single ending with a heroic 47 not out. KCC was out of the tournament, to the chagrin of Bhanu who had just rolled up ready to play in the final!

A tournament of mixed emotions and a lot of learning – and as much as San Gore can scream at us about the importance of being on time, practising our fielding, staying focused and thinking about our cricket…nothing quite like a defeat in a competitive game to teach us that. Oh yes, the finals was won by Lebara, the team we beat heavily in our first game.

All in all, the tournament was great fun, lessons were learnt and everyone was keen to participate next year….it’s all for a great cause anyway. 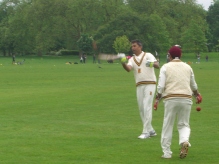 Deepak sends up a high one 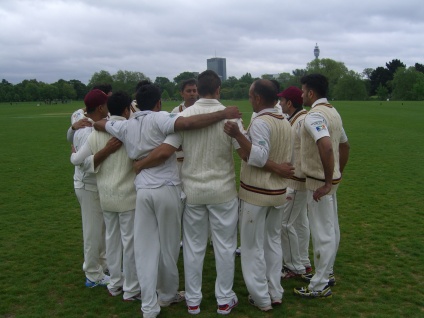 Nitin ‘s 85 in 51 balls against Labara is top class