They: 104/10 in 37 overs   (Stewart Strachan 26*, J.Smith 16, Wajid Tahir 5/25)
We: 108/4 in 22.4 overs    (Imran Khan 51, Ajit Ramsagar 23, Coventry 2/16)
Still reeling from our 2012 non-effort, we arrived at this beautiful ground in Newbury with a much stronger XI. Unfortunately, Falkland had a weak side out so it was a bit of a mis-match, again – but with roles reversed. Waj took 5 wickets ably supported by Saikat, Eddy and skipper Neeraj. Only Stuart Strachan provided any resistance as they were skittled for 104. Although Sher Babi fell for a duck we comfortably knocked off the runs with Imran scoring his first fifty for the Club. 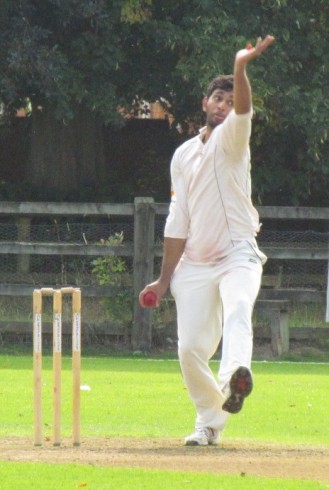 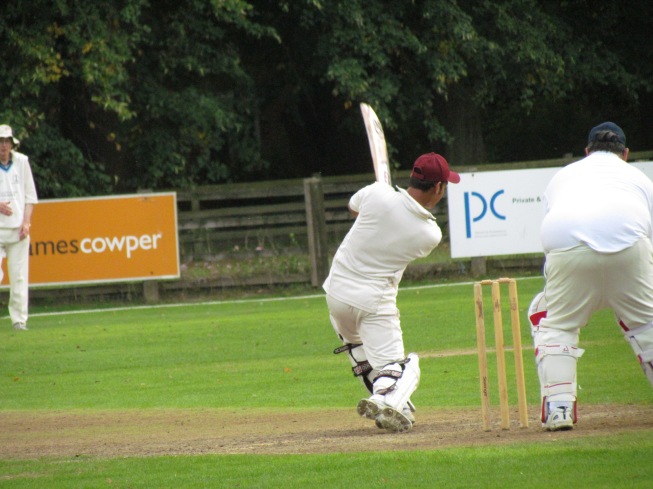 Imran Khan on his way to a maiden fifty

When KCC got a last minute game through the Conference as a result of the late September sun, little did we know this was going to be a day worth forgetting.

Falkland CC’s facilities were excellent, the pitch flat and the setting picturesque.  That’s all of the hospitality KCC were to receive though as each Falkland bowler tucked into the medium-weak KCC batting line up.  Tight bowling, a painfully slow run rate and some rather unfortunate choices of cricketing shots left the visitors 117 all out in 39 overs. The highest scorer (23 runs) was the Extras!

In reply, Falkland showed why they are a premier club in the Home Counties league.  Despite a rousing speech by Skipper Tabby Khan to motivate the team to take some wickets to show we weren’t pushovers, openers Trumper and Bloor knocked off the runs in 13.1 overs and we retired early to the bar to seek solace in our tipples.  It was painful to explain to the visiting girlfriend why we’d been so comprehensively beaten but the only valid point was that Falkland had clearly over-stated their strength to the Conference and an under par KCC side was always going to struggle.  We hope to be back stronger next year to win…Amen.